Cockroaches are not only undesirable pests but a threat to human health by consuming our food and contaminating the indoor environment. Cockroaches are known to transfer disease pathogens, such as the various bacteria that produce “food poisoning” in humans, by contaminating food, food preparation surfaces, dishes, and eating utensils. How many human gastrointestinal disorders are attributed to the mechanical transmission of pathogens by cockroaches has not been fully assessed, but remains a valid health concern. However, the roach’s greatest impact on human health may be its ability to trigger asthma. Cockroach nymphs grow by periodically shedding their “skin” (the exoskeleton). Fragments of their exoskeletons, along with bits of cockroach feces, serve as antigens (foreign protein) that, when inhaled, cause allergic and asthmatic reactions.

Several species of cockroaches live inside structures. Most domestic cockroaches are of tropical origin and the German cockroach, for one, cannot survive temperate winters outdoors. All are primarily nocturnal. All prefer warm, moist places where they can feed on human and pet foods, decaying and fermenting matter, and a variety of other items 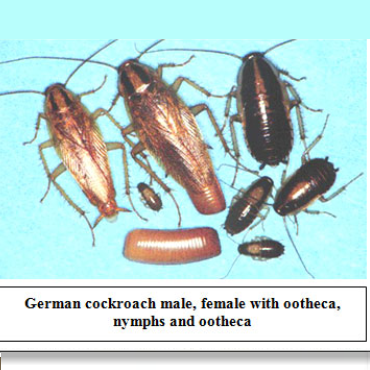 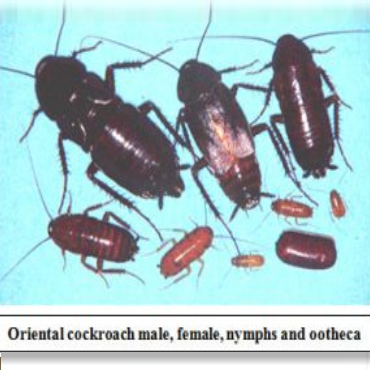 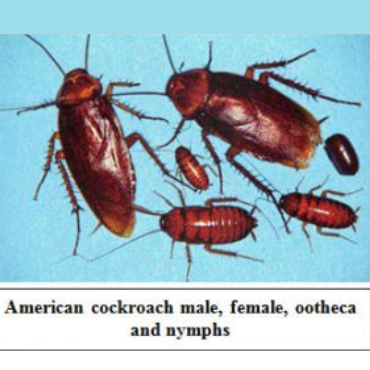 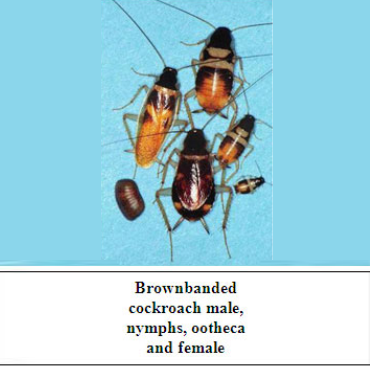 Food, water, and shelter are basic roach requirements. With all three present in sufficient quantity, cockroaches grow and reproduce with mated females producing oothecae – pillow-shaped egg capsules each containing up to 48 eggs. Tiny, wingless nymphs hatch from their eggs and gradually grow into adult roaches.

The German cockroach (Blatella germanica) is by far the most common roach found in kitchens. It is a half-inch long, bronze-colored insect that avoids light and hides in cracks and crevices. Adults and older nymphs have two black stripes on the back just behind the head.

German cockroaches spend about 75 percent of their lives in hiding. Enabled by a body that’s smaller than other species, the ability and inclination to hide in tiny spaces is one reason why the German cockroach has been so successful at living with humans. Coming out of hiding to feed or to mate can be dangerous, so it’s usually done in darkness. When the roaches leave their hiding spots, they only go as far as they need to find food and mates. Their hiding places are usually within 10 feet of their food source.

Another characteristic lending success to the German cockroach is its rapid reproduction. Unlike other roaches that drop their egg capsules days before the eggs hatch, the female German roach goes into hiding, holding the egg capsule on the end of her abdomen until the eggs are about 24 hours from hatching. This method of protecting the eggs, coupled with the relatively large numbers (30 to 48) of eggs per capsule, allows German cockroach populations to build quickly, such that about 80 percent of roaches in a growing population are nymphs.

The German cockroach prefers to live close to its own kind. Prime hiding places can be occupied by many roaches. Large numbers can be found clustering together under stoves, refrigerators and dishwashers, and in wall and cabinet voids. Roaches defecate in such places, leaving dark speckling that contains pheromones – scent signals that mark a surface as a “fecal focal point” where roaches will gather.

The Oriental cockroach (Blatta orientalis) is the so-called “waterbug” of basements, crawlspaces and garages. It lives in cooler habitats with plenty of moisture – even outdoors around foundations in leaves and mulch where it can survive temperate winters. As a result, the Oriental cockroach’s development is slower. They require an average of 18 months to progress from egg to adult, while the German cockroach averages only two months to adulthood. In addition, the Oriental’s egg case contains 16 eggs, compared to the German’s 30 to 48 eggs per case. After being detached from the female, eggs inside the Oriental roach’s egg case require an average of two months to hatch.

Oriental cockroaches also differ in appearance. Newly hatched nymphs are brown and become blackish as they grow. Adults are up to 1 ¼ inches long with wide, flat bodies and no distinguishing markings. Males have wings that cover about half of the abdomen and females have only wing stubs; neither sex can fly.

The American cockroach (Periplaneta americana) is a large species, up to 2 inches long. It is reddish brown, but lighter around the edges of the thorax. Adults have wings extending to the end of the body. They can fly in temperatures above 85 F. American cockroaches are less common in homes than German cockroaches. They prefer sewers and boiler rooms, basements and steam tunnels in commercial establishments, especially where food is processed or prepared.

American cockroaches develop much slower than German cockroaches. The American’s egg case contains 14 eggs to 16 eggs. Females deposit them, often near food sources, where the eggs typically hatch in about 45 days. Average time from egg to adult is about 15 months. Nevertheless, large populations can develop under favorable conditions.

This cockroach is sometimes encountered indoors, but it prefers higher temperatures (about 80 F) than the much more common German cockroach. It loves the warmth of electronics, motor housings, light fixtures, and ceilings. When German cockroaches are found in nonfood areas (such as bedrooms), this may indicate a heavy infestation, lack of hiding places, or use of a repellent pesticide – but such harboring in nonfood areas is typical of the brownbanded roach.

Brownbanded cockroaches (Supella longipalpa) are slightly smaller than German cockroaches and more colorful. Males are a golden orange color with a broad band of dark brown. They can fly, with wings that cover their abdomens. Females are darker overall, with lighter bands on the abdomen. They have shorter wings and cannot fly. Nymphs are dark with cream-colored bands behind the head, and are golden orange over much of the abdomen. Nymphs and adults may jump when disturbed.

Where long-term management or elimination is the goal, the principles of Integrated Pest Management (IPM) should be applied. Beginning with inspection, all effective means of non-chemical control should be utilized, including exclusion and sanitation.

A thorough inspection requires use of a good flashlight and often other tools, such as a mechanic’s mirror for inspecting voids difficult to access, probing tools, and a flushing agent (typically an aerosol containing pyrethrins). Inspect for signs of roach activity, such as dark speckling found where German cockroaches gather. Others signs include cockroach consumption of foods and the presence of cockroach egg cases and shed “skins.” These signs of infestation can help pinpoint where the roaches are living. The use of pest monitors (“sticky traps”) also can reveal valuable information by helping to locate areas of roach activity. The use of monitors should continue even after cockroaches are believed to be eliminated. Leaving traps in place and checking them regularly can help confirm elimination, and give early warning of the presence of new roaches in time to control them before the population builds.

Cockroach hiding places often lie within a few feet of their food source. Look in areas that offer warmth, food, moisture and shelter. Remember roaches prefer natural surfaces such as wood and cardboard.

Younger nymphs typically do not venture more than 2 feet from their hiding places. Adults usually roam less than 10 feet from harborage in search of food, though a female carrying an ootheca may not move or feed until the egg case is detached. Obviously, knowing how the various stages of roaches in a population move is of great significance to any management plan, as are thorough inspections, good sanitation and exclusion, as well as the appropriate selection and use of pesticides.

In dwellings with shared walls, such as apartment buildings, preventing cockroach movement between rooms and units is important. German cockroaches typically move through shared walls, for example, through gaps around pipes under sinks. These gaps should be filled with materials such as silicone sealant or urethane foam. In some instances, American or Oriental cockroaches may be living around the outside of the structure or in adjacent structures. In such cases, the building’s exterior should be inspected to find and seal points where roaches can gain access to the building’s interior.

Similarly, roaches can be excluded from hiding places by sealing the cracks, crevices and holes through which roaches access the secluded spots where they spend most of their time.

The ultimate goal of sanitation is to remove all sources of food and water from the cockroach’s environment. As with exclusion, this goal is usually not fully achieved, yet every effort should be made to remove as much food and water sources as is practical. While good sanitation and exclusion alone rarely ensure cockroach elimination, these two methods enhance the effectiveness of pesticide application. If dirt, grease and moisture are not removed, they can interfere with the effectiveness of pesticides. Also, insecticides such as baits perform better when alternative sources of food are unavailable. Roaches not only feed on the baits, but also forage farther, potentially exposing themselves to pesticide-treated surfaces. On the contrary, in situations where sanitation is poor, there is typically a greater reliance on pesticide, i.e., more pesticide use and thus a greater potential for misuse and human exposure.

Steaming and vacuuming can be a valuable means of sanitation, in addition to killing and physically removing cockroaches from a structure. Steam units and vacuums designed for insect control are available and effective, especially in heavily infested areas.

Applying an insecticide according to label directions, sufficiently close to where cockroaches are hiding, is as important as selecting the best pesticide for the job. Even the best insecticides will not be effective if roaches are not exposed to them or do not discover bait placements. Thorough inspections are necessary to find where roac bhes are hiding so that bait can be placed close enough for the roaches to find and consume it.

Since the 1980s, new cockroach bait products have changed cockroach management. Available in a variety of brands and formulations from gels applied by syringe-type applicators to granular products, baits have replaced the routine baseboard spraying and fogging of the prebait era. With the availability of effective baits, relying on baseboard spraying to control cockroaches disregards the most effective means of cockroach control.

While baits are effective against cockroaches, as with other types of pesticides, one product should not be used over long periods of time. Cockroaches have shown some avoidance of bait products, and even resistance (having the ability to survive after feeding on bait). Cockroach resistance problems can be delayed or avoided by using one pesticide product for a few months before switching to a dissimilar product.

Note that dusts, such as those containing boric acid, are often sold in squeeze bottles that can easily dispense too much product if used incorrectly, leaving unsightly and ineffective piles of powder. Dust should be applied to cracks and voids as a thin, barely visible layer. With gel and container baits for cockroaches, the opposite is true. Many placements should be made at the corners and edges of shelves, and under sinks, wherever roaches are hiding. With bait stations, a dozen or more should be used in infested kitchens. Likewise, many placements of gel or other roach baits should be used. Apply gel baits in small drops – not as thick, continuous lines like caulking. Do not contaminate baits by storing them near other pesticides or by spraying on or near stations and bait placements. Once bait are applied, be patient. It can take several days for roaches to die, particularly from exposure and for roach populations to be noticeably reduced.

Combining pesticide use with nonchemical methods, the effectiveness of each is method is enhanced, and cockroach management maximized

Don’t Hesitate to Question Us
Any Time